From 1838 until the formation of the New Jersey State Police (NJSP) in 1921, there was no notable law enforcement presence in Raritan Township.  Beginning in 1921, the NJSP began sporadic patrols of the township on horseback and motorcycle.  On April 19, 1950, NJSP Trooper Walter R. Gawryla was involved in a serious motor vehicle collision while patrolling State Highway 30 (now State Highway 31) on a motorcycle.  Trooper Gawryla died from the injuries sustained in the collision on April 21, 1950.

On May 13, 1968, the Raritan Township Police Department was established by township ordinance.  One officer was hired to provide police services to approximately 4,000 residents.  The first police department was located in the Township Building on South Main Street.  Two more officers were hired in 1970 and four new officers were added in 1973.  The police department was moved to a rented house down the street from the Township Building, near the intersection of Dayton Road.

Today, Raritan Township consists of a land area of 38 square miles in central Hunterdon County and is at the crossroads of State Highways 12, 31, and 202.  Currently, the population of Raritan Township is 22,720.  It completely surrounds Flemington Borough and is bordered by Clinton, Delaware, East Amwell, Franklin, Hillsborough, and Readington Townships. 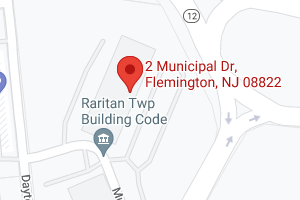